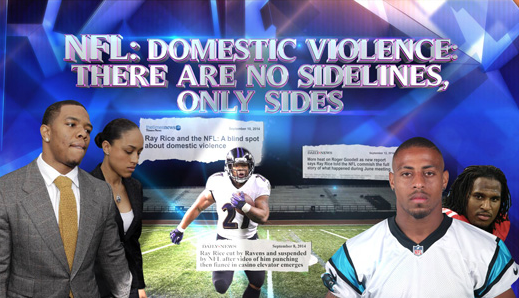 It will be interesting to see how the specifics shape up within the National Football League (NFL), as it takes ownership of creating a role model culture of professional football players who know how to behave and know how to demonstrate self-control and respect for another human being.

Domestic violence has been around since Cain murdered Abel. However, the increasing transparency and visibility of the intimate lifestyles of NFL players bring the issue to center stage for sports fans and society. If only security cameras and smartphones were not so prevalent, capturing our behavior especially when we think we are discreet or undetected.

Don't expect Anheuser-Busch to bail out on it brand association with the NFL.

The misbehavior of Baltimore Ravens’ Ray Rice and the child abuse charges against Minnesota Vikings star Adrian Peterson is a significant problem for the NFL and its brand image. As much as aggression on the field is a valuable attribute of the NFL identity, the spillover of that behavior off the field is concerning. The public’s anxiety is that the entire organization may have been turning a blind eye to this behavior, and as a result, passively endorses it.

The pressure is building on the NFL to act comprehensively, and the public outcry is building steam through social media. If the NFL is the kettle then its sponsors must be the pots. Whose brand can really call the kettle black unless it articulates and practices a firm position of its own? The NFL’s problem practically forces its sponsors to have to posture themselves against the curtain backdrop of domestic violence.

Get out in front of the problem, was most likely the PR counsel to the big brands associating with the NFL. A rapid response to the league’s issue forces the NFL’s defense to take the field. It will be a defensive game until the NFL makes formidable decisions backing its position and demonstrates its relentless commitment to it. It wants to get through the season and formally unveil its comprehensive personal conduct policy in February 2015, while it commits money and resources to domestic and sexual violence organizations and works with each team to manage their respective personnel issues.

Words without action chip away at a brand’s equity. Radisson and Procter & Gamble brands disassociated themselves quickly. No words to mince.

Trying to reflect the high road on the issue, other global brands are polishing their respective armor to deflect the negative spillover. “We are disappointed and increasingly concerned by the recent incidents that have overshadowed this NFL season. We are not yet satisfied with the league’s handling of behaviors that so clearly go against our own company culture and moral code,” says Anheuser-Busch. However, the position is weak without a timeline or clarity about expectations.

Even more lame are the brand positions of FedEx and Pepsico. Fedex prefers watching this game play out from the sidelines. “We are watching developments on these matters closely,” the company’s spokesperson says. Pepsico’s position: Domestic violence is completely unacceptable, but the company expresses encouragement that the NFL is now treating the issue, “with the seriousness it deserves.” Radisson’s brand position is serious. Pepsico’s position is almost laughable.

In a more direct response, Visa’s formal public statement says, ”Domestic violence in any form is unacceptable. It has no place in the NFL or our society more broadly.” The teeth in these words sound sharp. However, come February, we will discover what is acceptable in this brand association of Visa and the NFL.

NFL commissioner Roger Goodell is discovering that off-the-field behavior of players impacts the brand. He promises to sort it all out by February 20115.

Not surprisingly, Verizon expresses the most verbose and comprehensive position. It’s the leader in positioning its brand in the context of domestic violence by expressing its support of the NFL, its own active collaboration with the league to help address the issue, and touting its own leadership in addressing domestic violence as a company. Unstated, but clearly conveyed is the corporation’s commitment to the sponsorship. It’s a valuable brand marriage for Verizon.

On the NFL side, the league’s commissioner Roger Goodell did confess a failure in upholding a certain standard that reflects the NFL’s values. His commitment to do better includes an indefinite ban on the second offense of domestic violence. It seems like a line in the sand. However, a little wind over time can make the line blurry if there is no real commitment or depth to its claim.

If the pressure on the NFL causes the league and its supporting sponsors to reevaluate their respective positions in ways that keep the issue of domestic and sexual violence high on all our radar screens, then the NFL’s brand truly can be the most powerful influence for change in our society. It becomes a collaborative brand position with tremendous influence. Expect the television commercials soon.