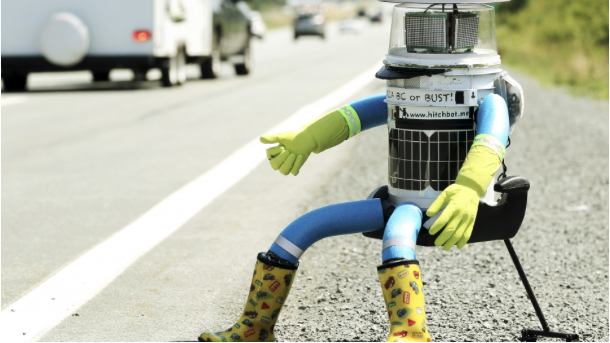 In a recent social experiment, the expression of hate was asserted not on man but on bot. A robot called hitchBOT, created in Canada, would test our ability to be kind toward another even if race, gender, gender preference, age, religion, political view, or any other human factor was taken out of the equation.

Using an almost obsolete method of hitchhiking, hitchBOT’s task was to hitchhike across the United States in a discovery of whether humans were trustworthy to help the bot in its excursion and to check the boxes of a bucket list it hoped to accomplish along the way. The mechanical bot was programmed to speak and expand its vocabulary, but it expressed its real sentiment primarily online and though social media.

Already a world traveler, hitchBOT was familiar with the highways and friendly cultures of Canada, Germany, and The Netherlands. No judgment of robots there. Next tour: The United States of America, one nation, once under God, once indivisible and never really with liberty and justice for all.

The bot’s tour began on July 17, 2015, in Salem, Massachusetts, ironically a place well known for its intolerance, especially for religious expression. The only need hitchBOT had was its reliance on the kindness of humans to help it visit Times Square, the Grand Canyon, Mount Rushmore, and other places on its list. Human generosity early introduced the bot to a Boston Red Sox game and a boat tour out of Gloucester, adding to the bot’s eventful summer vacation.

A short visit to Rhode Island brought hitchBOT to Connecticut and then to the Big Apple. Eventually arriving in Philadelphia, in route to Washington, D.C., in hopes of getting a pic at the Lincoln Memorial, hitchBOT encountered disaster.

Log: 4:04 PM - 1 Aug 2015 — Oh dear, my body was damaged. but I live on with all my friends. Sometimes bad things happen to good robots! #hitchBOTinUSA. Then minutes later,

Human vandalism got the best of the bot, destroying its parts and leaving it dismantled in the City of Brotherly Love.

The research team and makers of hitchBOT were touched by the outpouring on social media of sympathy over their loss and the failure for kindness to prevail from coast to coast.

“We know that many of hitchBOT’s fans will be disappointed, but we want them to be assured that this great experiment is not over,” a statement read. “For now we will focus on the question ‘what can be learned from this?’ and explore future adventures for robots and humans.”

Now, a dilemma: should Philadelphia consider stripping its claim as the City of Brotherly Love? Maybe we should erase the phrase forever, because for all its greatness, how can we ever forget the reality of its demonstration of hatred to man, and now bot? The motion picture, Philadelphia, starring Tom Hanks, portrayed a city’s culture that was a disappointment to a segment of our population suffering from AIDS, and a disappointment to its own aspirational public positioning.

Where do we stop?

Failure and disappointment permeate all that we uphold to a higher standard. The eventual discovery and revelation of it should not mean that we eliminate the stature or public highlight altogether. It does not require a robot to remind us of the higher altitude of discussions we must be conducting as we grapple with a growing effort to remove everything that falls short of perfection. In failure, there must be grace. In history, there must be wisdom.

Consider the lessons we could convey if we relied on the public display of flags and statues and famous names in the context of our teaching. To eliminate them completely from public highlight opens the door to historical and cultural memory loss of the very human acts we disdain. Let’s be careful not to overreact, but let’s also be careful to engage in a respectful dialogue that demonstrates wisdom and separates us from robots.

“Be kind and compassionate to one another, forgiving each other, just as in Christ God forgave you.”- Ephesians 4:32